I’ve read somewhere that travel is the only thing you buy that makes you richer. And every time I’m getting more sure about this quote. Doesn’t matter you fly in a business class or use economy tickets, you stay in a luxury apartments or in a simple hostel. The most important is how you spend your time, which places you visit and which memories collect. It’s only you who can chose to spend a lazy day on a beach, relaxing with a cold cocktail under shades of palms or go sightseeing, visiting museum, castles, get in touch with historical facts or clubbing.  Of course, each of options have their benefits, and all of them can be good, but you should also decide which is more important to do at that exact moment, which one is worth to do now and others to leave for another times. So, for today the history won and majestic Avignon welcomed us.

Avignon is a commune in south-eastern France on the left bank of the Rhône river. The historic center, which includes the Palais des Papes, the cathedral, and the Pont d’Avignon, became a UNESCO World Heritage Site in 1995. The medieval town is a major center for tourism. It is about 85 km north-north-west of Marseille and this is the place we’ll visit during today’s journey.
Exactly at the moment we arrived, the first thing that caught the attention was the old wall that was surrounding the historical part of the town. Here, in this area there were many residential buildings, that look exactly the same as the ones outside the wall. But the most important part here, that was calling all the tourists to come, was the Popes Palace, or as locals call it – Palais des Papes.

The Palace of the Popes stands as the mighty symbol of the church’s influence throughout the western Christian world in the 14th century. Construction of the Palace was started in 1335 by Pope John XXII who took over the Episcopal seat which stood next to the cathedral and transformed it into the papal residence. The two following Popes, Benedict XII and Clement VI, built the Palace of the Popes and completed in less than twenty years.

So, let’s enter and start from the very beginning. Once you buy a ticket, you’ll be offered an interactive Histopad, which will step you back in time by 8 centuries and give detailed explanations in 7 languages at all times throughout the visit, and you can better understand the paintings that are still visible on the walls. This was the first time I had such experience to have a real time guided tour by augmented reality and 3D technology that enhance your experience as you discover or rediscover many rooms of the Palace. Seems it was using a GPS technology to find your exact location and show the information about that exact room. It was quite user-friendly, interactive, educational and fun. With the help of these Histopads we could see the original splendor of the interiors: floors, ceilings, wall hangings, furnishings, obtain as they were in the 14th century. Moving the screen of the histopads you could see how the room was looking in its time, which kind of furniture it had,  how the frescoes look like, you could even look from the windows and “see” how the gardens were before! That makes feel the reality of 14th century in our days, and this was amazing!

You might also be interested in:
Calanques of Cassis
Magical Verdon
The Town of Fountains and Museum, Aix-en-Provence
Loire Valley Castles

By the way, it turns out that the garden of the Palace is being opened to visitors only few times a year and you know what? We were there on that lucky day and could enter a small but fabulous garden, where the popes were growing fruits and vegetables. But now it’s all covered with roses, lavender fields and olive trees. This was a beautiful relaxing place to spend some time, back in 14th century or today.

The Popes’ Palace as we see it today is the biggest Gothic palace in all of Europe (15,000 m2 of floor space). As a visitor we can see over 20 rooms, scenes of historic events, in particular the pope’s private chambers and the frescoes painted by the Italian artist Matteo Giovannetti. Each room was decorated with all the pieces of furniture that remains, with some artifacts found in place, sculptures of Popes, frescoes on the walls and ceilings. Thanks to Histopads, all the details were being told about every single corner of this important historical place. On some point steps lead us to the roof, where was a small cafe to have cold and hot drinks and beverages, but much more better experience was to have a panoramic view to the whole town and the river Rhone.

But the historical places doesn’t end with the Palace only. Not very far from it, just in 5 minutes walk there was a bridge standing.. or better to say half of the bridge Pont d’Avignon, or as it’s called more frequent – Saint-Bénézet bridge. A bridge across the Rhone was built between 1171 and 1185, with a length of some 900 m (2950 ft), Initially it had 22 arches. But the bridge was destroyed during the siege of Avignon by Louis VIII of France in 1226 and now only 4 of the arches remain. It was rebuilt but suffered frequent collapses during floods and had to be continually repaired. Several arches were already missing (and spanned by wooden sections) before the remainder was abandoned in 1669.
The entrance to the bridge wasn’t free, a ticket must be bought for it as well, which included also a audio guide with small old pictures and video creations. It wasn’t the same as the histopad, but still was giving quite detailed information about every step on the bridge.

In the Middle Ages, the Saint Bénézet bridge was part of one of the most important pilgrimage routes between Italy and Spain. On the remaining part of the bridge are still available the Saint Bénézet and Saint Nicolas Chapels. 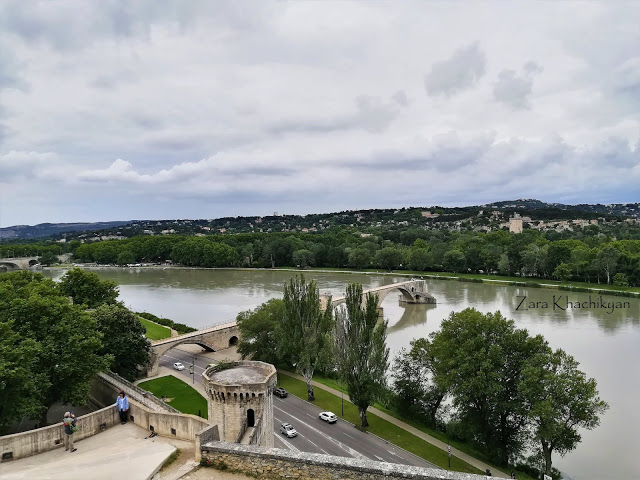 The bridge had quite important meaning in the history. Before it was built, people were crossing the river Rhone by small boats. This 4m wide bridge was the only place between Lyon and the Mediterranean to cross the Rhône. The city attracted travelers, merchants and manufacturers and quickly developed. It was also one of the reasons for the popes to make the decision to settle there in the 14th century.
After exploring all the historical areas here, walking in the cozy streets of Avignon, shopping in the bright and welcoming souvenir shops it’s time to have some relaxing walks in the big gardens near the Palace. Here the entrance was opened for everyone. A beautiful green area, with some sculptures and artificial small caves, offered a fresh air, places to sit for some drinks. But if you walk a bit more high, you’d have another great view to the town, to the Gothic Palace, as well as the view to the bridge, where you can see how it looks from above. And if you look carefully, you can see where the bridge was ending, as there are the ruins on the other side still remaining.

At the end of the day I was super happy that didn’t choose to spend a day on the sands, on one of the coasts of the Mediterranean. Instead I had a great experience to visit a beautiful place, full of adorable and realistic moments from history, wonderful views and irreplaceable memories 💓  This was definitely the right decision! So, my advice, if you’ll be close to this place, never ever lose your chance to step back in history and feel part of it inside the walls of Avignon.