Armenia is a small country in the Middle East, but despite of its size it has history of thousands of years and has a lot to offer to any kind of tourists and travelers. You can go for sightseeing in Yerevan and outside the city, visit hundreds of museums, go for hiking to high mountains and enjoy the landscapes. But I will also give you tips about archaeological places to visit in Armenia, that have a story to tell you.

Erebuni Fortress
This is the first site that you should go to check. First – because it is in Yerevan, you shouldn’t go far to reach it, and second – because the history of Yerevan starts here. Your tour will start from the archaeological museum on top of the hill. On the picture below you can see the view from top of the hill to the museum building below and the city view: 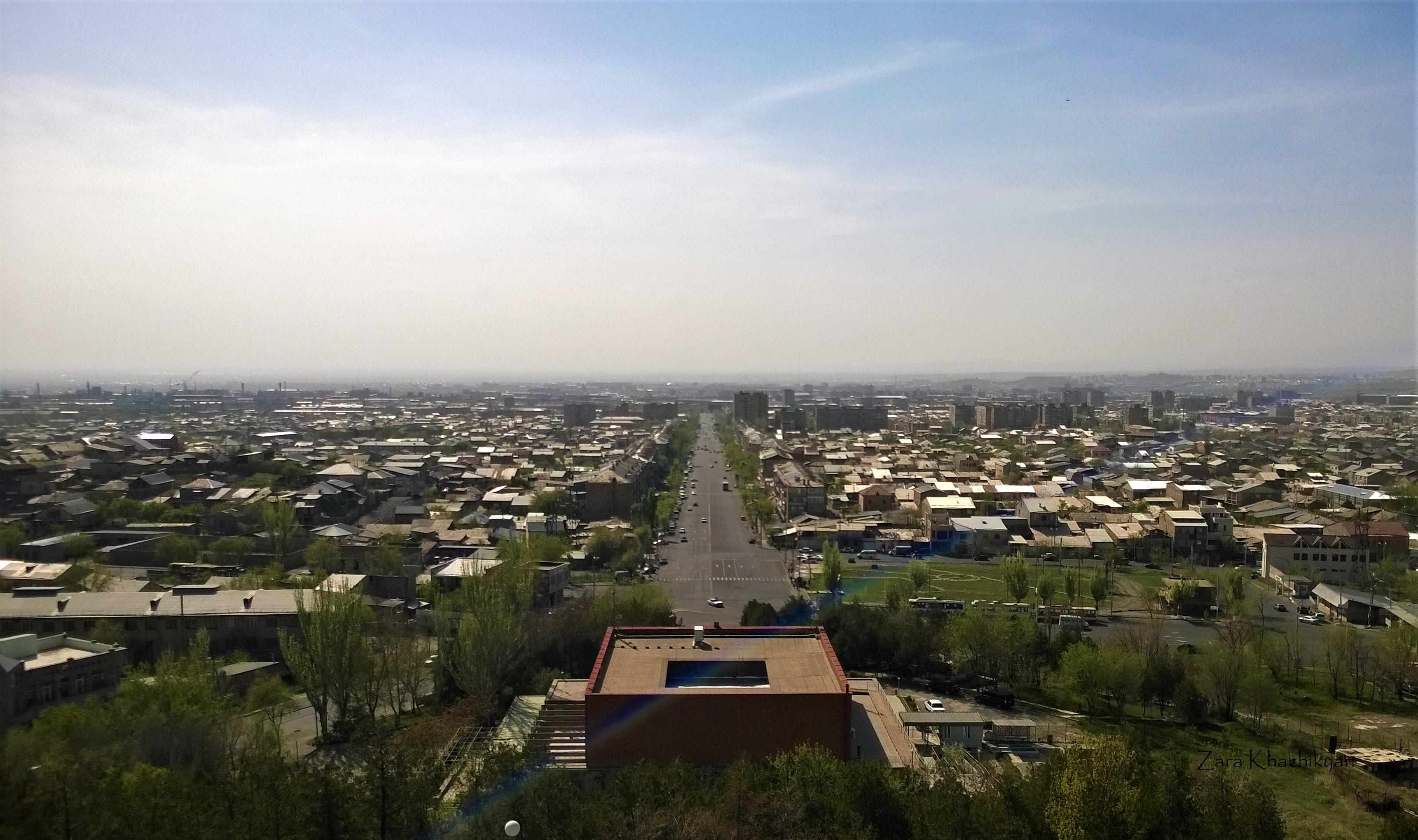 Here you can see all the artifacts that were found during excavations. Then you will have a way opened to you to climb up the hill using long steps. The fortress, which was the residence of Urartian Kings, was founded by Urartian King Argishti I (r. ca. 785–753 BC) in 782 BC.

During archaeological expeditions there were several inscriptions discovered. Some of them are still seen inside the ruins of fortress. Within those there was one dedicated to the city’s founding which was carved during Argishti’s reign. You can see this carved stone inscription in front of the Erebuni Museum. The “translation” of the inscription says:

By the greatness of the God Khaldi, Argishti, son of Menua, built this mighty stronghold and proclaimed it Erebuni for the glory of Biainili (Urartu) and to instill fear among the king’s enemies. Argishti says: The land was a desert, before the great works I accomplished upon it. By the greatness of Khaldi, Argishti, son of Menua, is a mighty king, king of Biainili, and ruler of Tushpa.”

I will not go much into historical details, but the fortress is a good break from the city and in the same time a perfect place for touching ancient historical times. Come here to see almost 3000 years old fortress ruins, where you can easily differentiate small and big rooms, see mosaic walls and even enjoy the view to today’s Yerevan from the hill.

Admission charges:
If you’re going to visit museum and the archaeological site, the ticket fee is 1000 AMD for adults (which is around 2 Eur).
The ticket for the site only costs 500 AMD (around 1 Eur).
In case you want to have a guide in foreign language, prepare another 2500 AMD (~5 Eur) to pay.
Read more about the site history and all it offers on Erebuni’s official web page.

Zvartnots Cathedral
Not very far from Yerevan, just in 20-25km away, there is another place you should never miss. Here you will see ruins of a beautiful Cathedral built in 7th century. In the small museum in site you can see some examples of excavations that were found in this area, as well as the replica of the Cathedral original look. Some of the wine vessels found on site are also shown in front of the museum.

The temple was initially dedicated to St. Gregory the Illuminator and now is known as the “Celestial Angels Cathedral”, as it is said that it was here where Armenians adopted Christianity in 301 AD. It was huge and beautiful at a time, was one of the highest buildings in its period, but it was destroyed during years because of earthquakes and invasions. The columns that stand until now are magnificent.

Except the columns, in the area you can see also different pieces of the Cathedral, such as fragments of the blind arcade, decorated with grape fruit and leafs carvings, as well as the eagle capitals which are shown in picture below. The cathedral that has a unique circular design was added to UNESCO’s World Heritage List in 2000.

Karahunj or Armenian Stonehange
Now let’s travel a bit far and check one of the oldest and most mystical places in Armenia, Karahunj (AKA Carahunj, Carahunge, Qarahunj). For this you’ll need to drive about 250km from Yerevan (better to combine it with another sightseeing trips and check few more places on the way during the same day). At first you may think this is a simple collection of small and big stones, but when you look carefully, you’ll see that’s not!
There are several opinions about what this place could be. The meaning of its name is “speaking stones” because stones and bored holes into them make sounds during the wind (“kar” means “stone” in Armenian, and the “hunj” means “sound/eco”). This place is often compared with Stonehenge. In 2004 it officially was named as Karahunj Observatory. A number of researchers concluded that it was used as an observatory for more or less 5.500 years, while the monument is at least 7,500-years-old, but possibly much more..

But what is it in real? There are several opinions about this and one of them confirms that this is the oldest astronomical observatory in the world. According to this, the holes on the stones, that has 0.5-3m height and up to 10 tons of weight, were made in special angle that allowed to follow exact stellar constellations, so the holes were used as an early telescopes. And even in our days, there is one stone, which hole passes the sun rays on summer solstice.
Another opinion says that those stones were used by farmers for some reason, and the holes were made to pass the rope through the them so horses (or neat) could pull them. But here we have another question. How animals could pull such heavy stones and why? We’ll never know…

On another side, if you look to those stones from above, you can see that they’re arranged in circle, and this area has super different energetic field. Specialists say that this is related with Ufology and stones are made and left here by another civilization. Mystery? Science? Life? What you think about this?
One more thing I’d like to share. There is one stone different than those huge megaliths. It’s said that this is the first curving of a man on stone ever made in the world!

Karahunj has another name as well, “Zorats Karer”, which literally means “Stone Army”. A legend says that at a distance the stones used to resemble an army and during wars it made an illusion of a large number army scared enemies.
You can easily reach here by car. Entrance is free, so you are welcome to take your telescopes and come here for amazing sky views! By the way, National geographic includes Armenian Karahunj in top 10 ancient stargazing sites 😉

Petroglyphs of Ughtasar
Okay, as we’re already at Karahunj, would be great to check one more ancient place in this region. Not very far, only 60km away from Karahunj, there is Ishkhanasar mountain range. Here on mt. Ughtasar valley there is another area full of stones. But they’re totally different from previously seen megaliths. Those are stones of volcanic origin, and on most of them you can see ancient carvings of different animals, hunting, dancing scenes, geometrical (rivers, lakes) and even astronomical figures such as sun and moon. 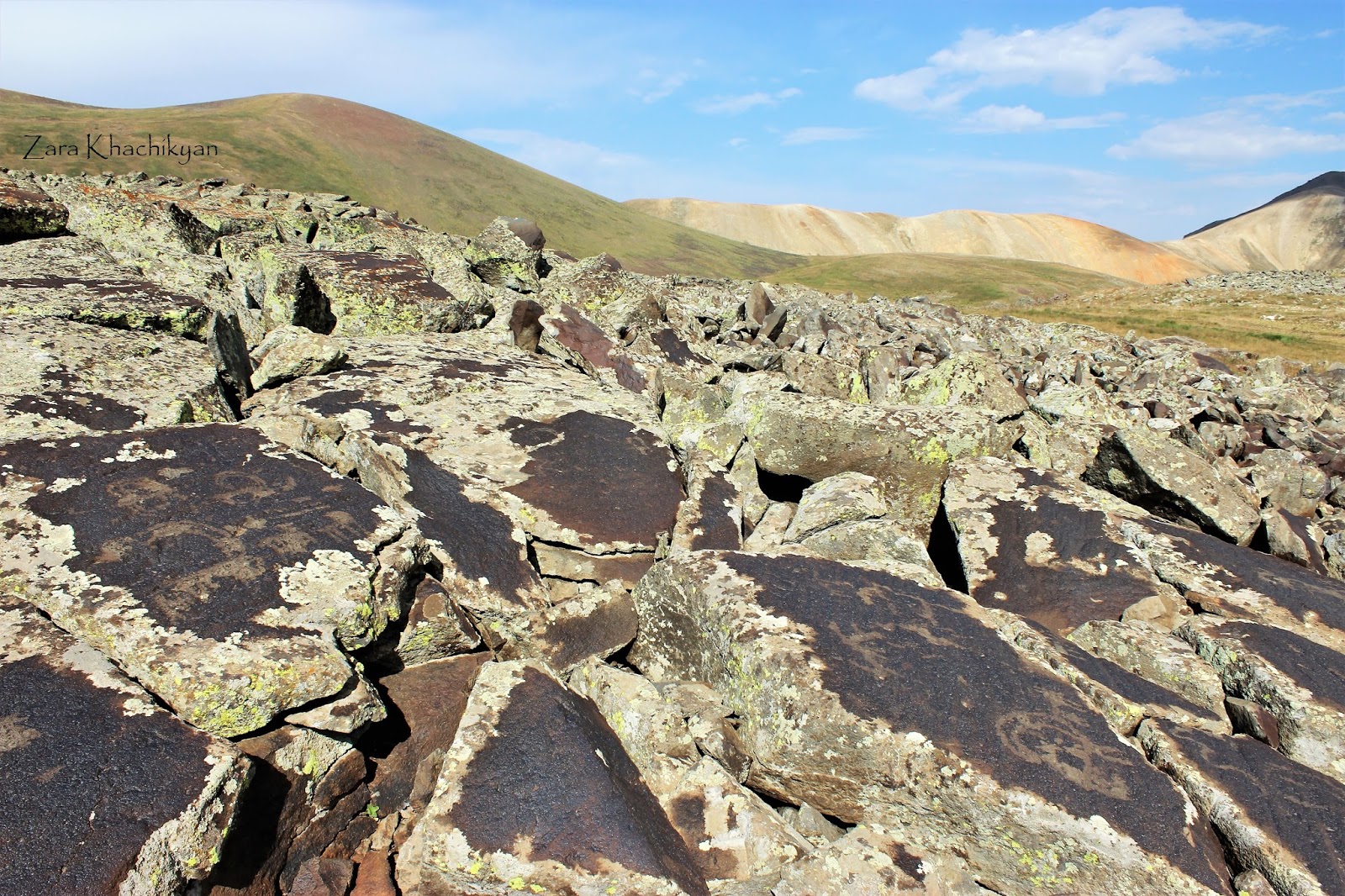 Those petroglyphs were discovered during archaeological excavations. The number of such carved rocks is around 2000 and they are spread all over the valley. This place is accessible by off-road car or a long hiking but from the nearby village it is around 17-18km, so make sure you are ready to walk and have enough time for that. Also take in mind, that it’s on 3300m above sea level and most of the time is covered with snow. So better to come here on summertime which would let you admire on beautiful landscapes and enjoy the crystal clear blue water of Ughtasar lake.

Areni-1 cave
Armenia is all in mountains and is full of small and big caves. Each of them is special in its way. One is full of huge stalactites and stalagmites, another is all covered with shiny crystals, third one was a place of people living until recent times. But there is one cave complex, which has left its important step in the history.
During archaeological works there were several fermentation vats and wine press discovered in Areni-1 cave (AKA “Bird’s Cave”), as well as different seeds and fruits (wheat, barley, and apricots, as well as other edible plants) from which wine was being made. It is confirmed that Areni-1 is the oldest known winery in the world with 6100 years of history.

In the same cave complex there were also another discoveries found during excavations works. Here are some of them:
– three individuals who lived in the Chalcolithic era (c. 5700–6250 years BP)
– the oldest humanoid brain
– a straw skirt dating to 3900 years BCE
– the earliest known shoe (5500 y.o.) made from leather, which is now kept in History Museum of Armenia. 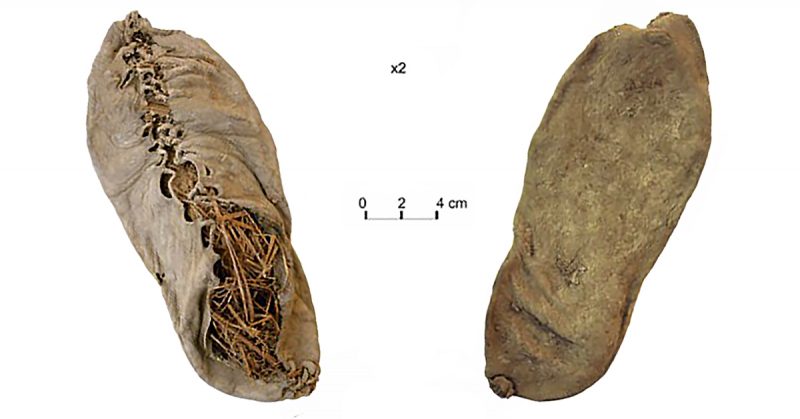 So as you see, this place is really full of artifacts. You can visit the cave with some group-tours (not sure if the “door” is open for single visitors).

This is only small part of the places in Armenia that have thousand years of history. It is said that Armenia is an open-air museum, which will surprise you on every step. Then why to wait? Come and see all its beauty yourself and you will want to come back again and again. People who’ve already been here will surely confirm my words. Yes? 🙂

18 thoughts on “Archaeological Sites in Armenia”

Something beautiful to your timeline 🌼
BACK TO FLYING ✈️
Springmood 🌸🌸🌸
They say some millenniums ago this was an Observatory- zikkurat, from where few thousands years ago people were following bright shining Sirius 🌟
Almost forgot to share...
The architecture of Munich Town Hall 🧡