Bayern region is full of medieval towns with their castles and history, adorable architecture and beautiful gardens. Almost in every town you can find small or big castle, which surely will catch your attention with some of its details. Some castles are quite well known and are located in one of the most visited towns, but there are places that probably are not that much touristic and famous by foreigners. While surfing on internet in search of some interesting places to visit during my trip I came across with a city about which I even never heard a word. But it became one of those in my top list of places not to miss to visit. Today I had that opportunity to make a very quick visit because of very short time, as we combined it with a day trip to Nuremberg and had just few hours to run into the most interesting places.

Tip: Use Bayern Ticket to have unlimited travels within Bavaria during a day using any public transport. This will allow you to visit 2 or more towns in a day and see as much places as you can.

This was the long waited trip to Würzburg. I can speak endless about this town, how adorable was it. It was around 4pm (or even more) when our train stopped in the central station. Even from the entrance you can see the beauty of this place. In front of the central station there was a nice fountain in the middle of the square. We knew exactly where we need to go, so started to walk on that direction, enjoying refreshing ice-cream (even it wasn’t hot) on the cozy streets and not missing any small or big place that was on our viewpoint. In around 15 minutes we reached our destination. It was the Residence of Würzburg which has been a UNESCO World Heritage Site since 1981.

A little bit of history: The Prince-Bishop Johann Philipp Franz von Schönborn wanted to have a palace comparable to the Palais de Versailles, so he used the funds to undertake a building project that started in 1720. Its vast ceiling fresco is the largest in the world. Emperor Napoleon Bonaparte slept in the Residence when he stopped in Würzburg three times between 1806 and 1813. Today the residence has almost 400 rooms but only representative rooms are open to the public. 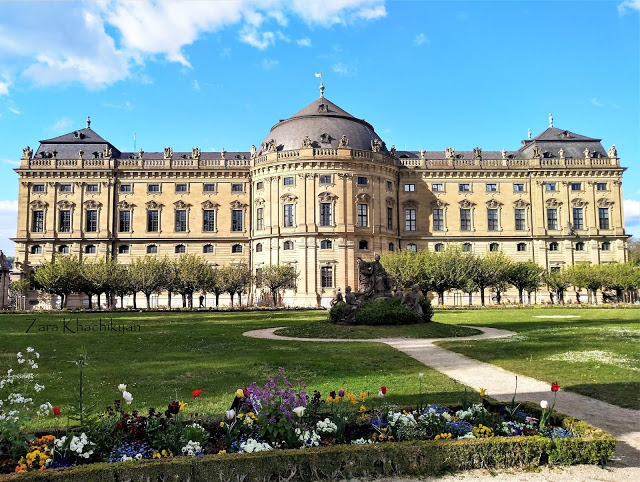 This was a huge building with gardens behind. We hurried to get in and visit the castle as it was going to close soon (but gardens would be open until dusk). We had to leave our backpacks (even if they were small) in lockers as it wasn’t allowed to take them inside (note: lockers need 1-2 eur deposit, which would automatically given back once you open the lockers back. So in general you leave your bags for free, but make sure to have coins with you). At the entrance we were informed that photography is not allowed inside, at all! And when we entered the first hall, looked up, I felt how my heart jumped from its place, how I stopped breathing because of the view I had in front of me. No any word can be enough to describe the beauty of this place. I’ve been in so many places, but never saw anything like this. All the ceiling was painted with vibrant frescoes that we couldn’t believe are real. But this was only the beginning. On the first floor there was a large room – Garden Hall, with huge windows opening to the garden. This was a bright room with another marvelous ceiling that you’d want to look without closing your eyes for even a second. Architect Balthasar Neumann’s world famous staircase (picture below) was leading us to the second floor from 2 sides. 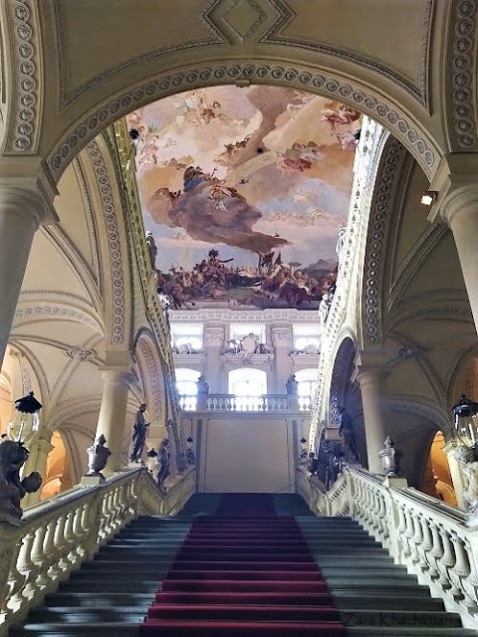 TIP: As mentioned, photography is forbidden inside the palace. The only was to take pictures is to get the permission in advance my contacting Residence administrative office with all the details: the date of your visit, the intention of photography, etc. Some costs may apply. All the terms and conditions you can find in their official web site. If you ask how come I took this pic, I’ll say that it took some efforts, but I got it verified before sharing with you and it now bears the copyright “Bayerische Schlösserverwaltung” http://www.schloesser.bayern.de.&nbsp;

Here the first room was the White Hall, where every single decoration was white and so gentle. After this there was an entrance to the Imperial Hall which was located exactly above the Garden Hall. Here also we stopped breathing because of the unbelievable frescoes and decorations on the ceiling. The whole “image” was created with paintings, statues, artifacts (such as weapons), etc. But what was more interesting was that you’ll have to look twice or even more to understand what you really see: is it a painting or a statue. There were some parts in this ceiling that were painted but you’d feel them so real as figures coming out from the walls… This was an illusion that I couldn’t believe people could create in 18th century. In modern words this could be called as a 3D graphics 😃

TIP: The admission fee is 7.5 eur regular, but if you buy a Bavarian Castle pass (available 14 days and annual passes), you can visit this and around 40+ more palaces within Bavaria for free. See the full list of castles you are welcome to visit with this ticket here.

In this room we met a group of other visitors who had a guided tour. We also joined them (by the way, this was a free guided tour, which is included in the ticket). The lady was telling in details everything about the history and all the details related to this palace. Lucky we that we and joined this group, as we entered to some sequence of rooms which were accessible to guided visitors only! So make sure you also have one to see all what is hidden from others. From here we started to check room by room while listening to interesting stories and facts about this palace. One of the rooms which was a bedroom of Marie Teresia, the daughter of bishop of Würzburg but there was no any bed where she used to sleep or any other furniture. It turned out that she didn’t live here but came to stay for a short time periodically. And when she was travelling, she had a carriage of 240 horses. so every time they brought the bed with them and took back after. Strange behavior for such a rich people, who could afford a big bed in each room. However.. rooms here were one nicer another, and the last one we entered with a guide was all covered with mirrors. Unfortunately, as most of the rooms in this palace, this one also was damaged and ruined during WWII, but thanks to great specialists, it was reconstructed perfectly. From this room almost all the mirrors were broken except one small piece. But when you look aaround, you’d never say that some years ago here nothing was left after bombing. 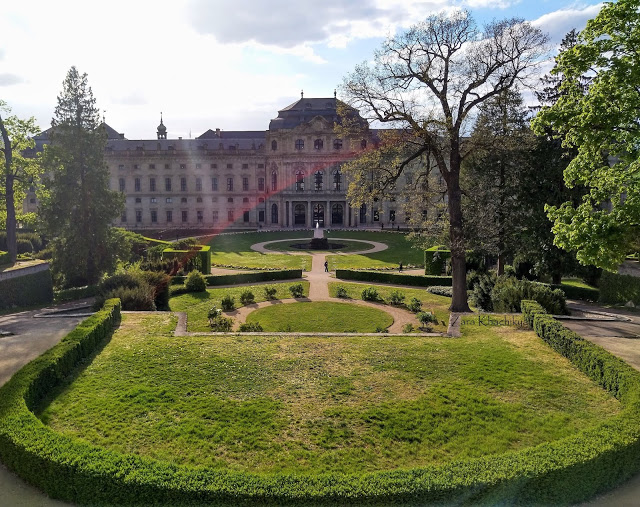 We continued our impressive visit to another rooms, but already without a guide. Still looking around with an open mouth! Time is up, they were going to close the palace and we had to leave also. But it was not the end of the day yet. Sun was shining outside and we had some time to enjoy the magnificent gardens of Residence. This was quite a big area perfectly shaped with green grass, nice flowers and trees. There were still flowers seen on the trees, but most of them already fell down. So if you’re planning to visit Würzburg and want to see it in flowers, better to plan a trip in the beginning of April. 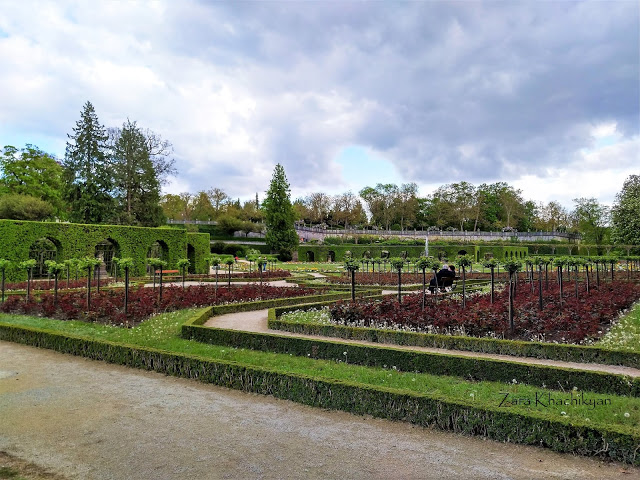 We had almost 1 hour left until our train back home but still had to see the famous Old Main Bridge. For a moment you’d think you’re in Prague, but no 🙂 This was real copy of Karlof’s bridge, the same style, monuments from both sides, a lot of people on it, just standing. 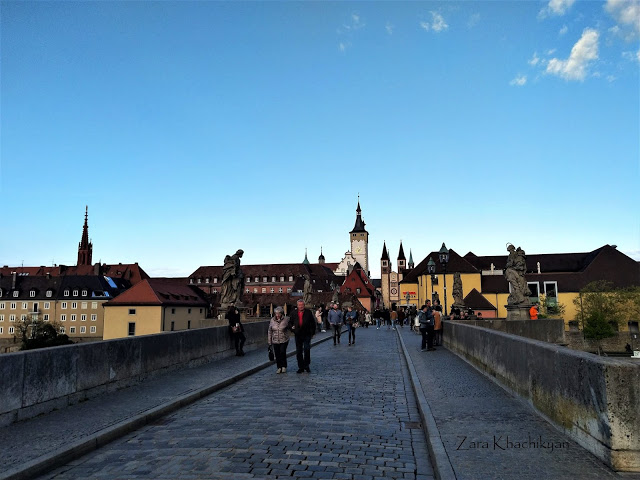 On the other side of Main river there was the Marienberg Fortress which dates back to 8th century when it was still a small castle. After in 1200 a large castle was built which was extended during the Late Middle ages and the Renaissance and was surrounded by massive bastions. In 1945 this castle also was burned out completely but reconstructed around 1990s. I read somewhere that it contains an outstanding collection of art treasures and has another nice garden, from where you’ll have a splendid view of Old Bridge and Würzburg town. By the way, you can use the same Bavarian Castle pass to visit Marienberg Fortress as well. 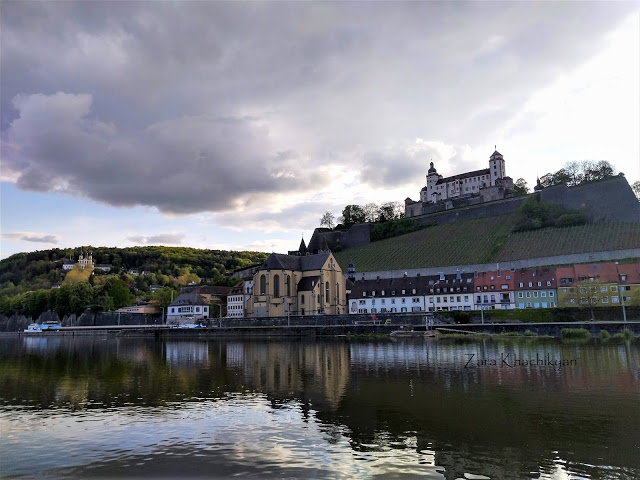 But the Old Bridge was also a place to drink famous within locals white wine. There was a small wine-shop right on the beginning of the bridge and you can see many people standing around with a glass of wine enjoying the sunset. This was definitely a nice place to come for the best views of dusk over Main river. 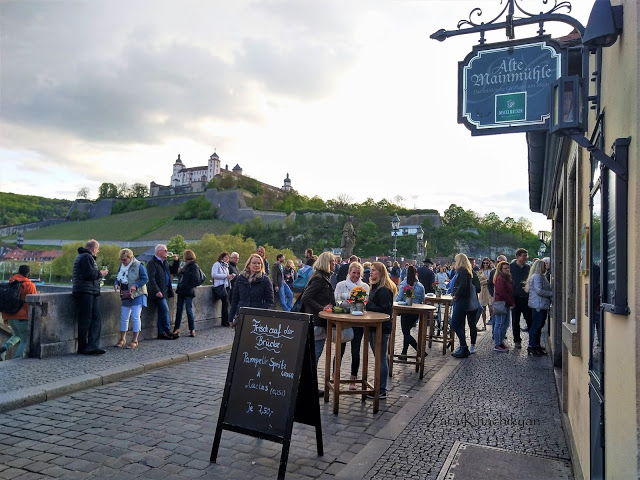 Würzburg was a place where few hours are not enough. There are so many things to see here that you should plan to spend a full day or 2 in this beautiful town to enjoy all the corners and historical places around. This is definitely one of the best places you should include in your Bavarian itinerary.
Too bad we couldn’t stay long here as we had a train scheduled soon to go back home, so we left a last look around and with a great satisfaction of the spent day ran to the train station. 3 more hours on the way and we are in Munich again, ready for another day full of adventures and discoveries in a new city 😎

2 thoughts on “Residence of Würzburg: a Must Visit Palace in Bavaria”