The last day in Budapest. Seems time is never enough to discover all the corners of this amazing city. During last 3 days we walked a lot, almost all the time, saw so many places, hidden treasures, but even if we’d have more than a week, we could still walk all day long over the streets of this giant wonder, but would still need some more days (or maybe weeks) to see all, if that is possible of course.
Today’s plan was to go on top again, from the other side of Buda and admire with the city view, so we did. But first we had some missing spots to fill in Pest as well. During last 3 days we passed over Parliament house only on night time, which was amazing, to see the giant building all in lights, shining and reflecting in Danube. But we didn’t want to miss a chance and visit it on a daytime. And we started from here. The building is so big, so beautiful, this was really a breathtaking view. The height of the building is totally the same as the height of St. Stephen’s Basilica, which was made to show that the rights of Religion and Low are on the same level here. And since then, no any building can be build higher than these two. Parliament house is one of the main tourist attractions in Budapest. It’s the largest building here, which is also a seat of National Assembly. It’s built in Gothic Revival style, has centralized dome and symmetrical facade. But the dome is in Renaissance Revival architecture. From inside everything is also symmetrical and made in the same way, so now it has 2 identical parts, which which one is used for politics, another one for guided tours.

Not very far from Parliament House, just in 300 meters away, there is another famous monument that is called “Shoes on Danube Bank“. This is a memorial in remembrance of 3500 victims, whom whom 800 were jews, who were killed during World War II by fascists. They were ordered to take off their shoes and were shot at the edge of the water, so their bodies will fell into the river and carried away. The memorial represents their shoes left on the bank of the river. Many people are coming here to see the iron made shoes sculptures, some others come to bring flowers and respect the victims. And that was really sentimental feeling to be here, knowing what happened. That was the saddest part of our days in Budapest.

After this it was a time for a short break, before going to Buda. So we decided to go to one of the most amazing and probably not that well known place here, Cat Cafe. You’ll ask what is that? So, this is a simple cafe, where snacks, tea, coffee and sweets are served, but it’s made in a not usual way. It’s like a big house for cats, many cats, who lives here, do whatever they want and all you can do is to look at them, smile, touch or play with them with special toys. This is the cutest place, with small and big (or even huge) cats, who were sleeping near heating tubes, walking on the tables (!) or playing. It’s always full and tables are booked in advance. We didn’t book a table, so it was a bit hard to convince waiters to let us in, as there was no place and all free tables were waiting for their owners. We made poor eyes and asked a lot, and could finally get it. That was fun. Tasty cakes, hot chocolate and coffee and lot of fluffy cats. What else is needed for happiness? :))) We really enjoyed the time spent here and if you are a cat lover, don’t miss your chance to come here. And the prices are not high compared with other cafes, so it’s worth it! 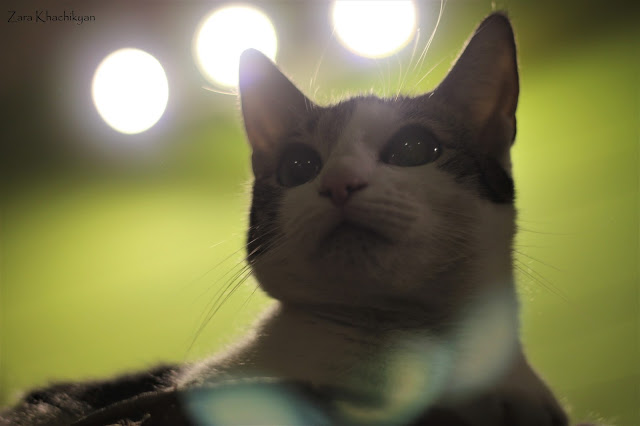 After having a nice but short break we continued our day by walking across Danube River, to the direction of Chain Bridge. This was a large avenue with a lot of statues and sculptures, from which the main well known were Statue of Little Princess, Shakespeare, Girl with a dog, Painter etc. In general, you’ll see a lot of statues in Budapest, almost on every street, in every corner, but if you’re not familiar with Hungarian history, they will seem like a men on horses or with books, as they’re mostly statues of local heroes or writers or saints..

As already mentioned, the main plan for today was to go up, on top of Gellert Hill, from where we could see all the city like in hand. The closest way was to pass the Elisabeth Bridge and take the steps up. Steps were a lot, but wasn’t heavy to walk up, as there were a lot of small spots designed for a short rest or even to stay and look from there as a view point. But what was waiting for us was on the top, from the Citadella monumental fortress. The place had strategic importance for the history of Budapest. There is an open air display of a small collection of Red Army weaponry. On the top there is the Liberty statue standing which commemorate those who sacrificed their lives for the independence and freedom. Two smaller statues are also present on both sides of Liberty statue.
And the panoramic view opened from here was really spectacular. All the city with its 8 bridges could be seen. If you’re lucky and have clear weather, you will have an unforgettable view that will not let you turn around or close eyes. We were standing there, looking far and admiring with this real beauty. So relaxing and energizing! 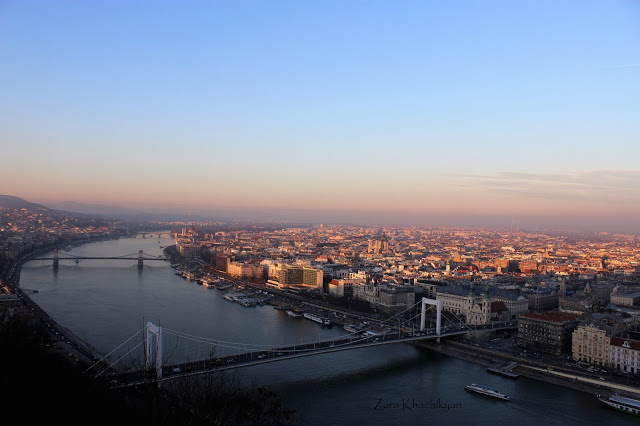 But sun started to go down and we had to go back before the dark. There were several paths down the hill, all passing into the forest kind of park. Huge trees were appearing in front of us, strange statues as well. Suddenly there was a small play ground found in the middle of this park and we, forgetting about the age, started to play there, to slide down screaming, laughing. This was so much fun! 🙂 We didn’t want to stop but time was flying and the sky was becoming more and more darker. Wouldn’t be much pleasant to be alone in the middle of those trees in a dark. Budapest is safe, but we have to be safer. So we continued the way and the view that was opened forced us to stop again and look deeply into the buildings on a dust. These were Gellert Thermal Baths and Gellert Hotel. Another amazing spot in this great city. 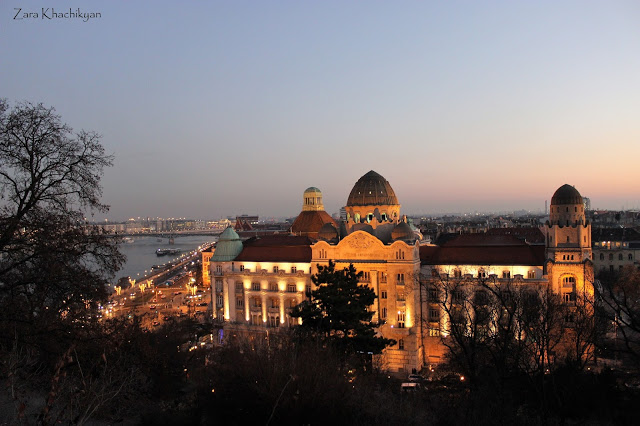 The steps brought us directly to the Liberty Bridge, which was already known by us, remembering the specific green color. On the left side of the bridge there was also Gellert Cave, which is a part of Gellert Hill caves, that became a church. As it was already late and everything was closed, we couldn’t enter here as well. That was pity, because this was one of the unique places.

And our time was ending. We had to go home, to pack our luggage and go to sleep early, as we had another early flight to Milan and had to wake up in the middle of the night. Luckily there was a shuttle service available in Budapest, that takes you from your home address directly to the airport. This was quite useful as at that time of the night no any service was available except taxis, which would cost much more expensive.

As a conclusion to this short trip I would say that it was full of emotions, full of memories, full of adventures, fun, tasty food, drinks, laughs and much more .. Definitely need to come back to fill all the missing spots that we couldn’t do during these four unforgettable days…

3 thoughts on “The View from the Top: Budapest, Day 4”

BACK TO FLYING ✈️
Springmood 🌸🌸🌸
They say some millenniums ago this was an Observatory- zikkurat, from where few thousands years ago people were following bright shining Sirius 🌟
Almost forgot to share...
The architecture of Munich Town Hall 🧡
Prayer flags 🇳🇵