If the South of France is admiring us with its breathtaking coastline cities, beaches and nature, then North of France is rich with historical towns, full of monuments and memorials reminding us about World War II times. The region we’ll be travelling today will be in historical French Flanders, which lies in the modern-day region of Hauts-de-France. Here there are a lot of small towns, not much known for most of the tourists, but have something to show up to the wanderers. There is a village crossed by the rivers Aa and Colme, which also gave a name to that village Watten (Dutch: Waden, meaning “ford” as in “river-crossing”). The main attraction for the visitors is the restored stone windmill (Moulin de la Montagne) from 1731 on the site of an old wooden mill. The mill lost his wings in 1937, then his roof in 1940. After that the Germans transform it into an observation post for the army. In 1985 the municipality started its restoration laying a new roof and wings. There is also a 13th century old ruined abbey nearby, which you can visit.

But if you want to go more deep in WWII facts, you can visit the blockhaus of Éperlecques (also known as the “bunker of Watten”) which is a second world war bunker located in the woods of Éperlecques. In 1942 Hitler ordered the construction of giant bunkers for the launching of V-2 rockets, and the first one was planned to be started in Pas de Calais as a matter of urgency. This enormous bunker was constructed by the Germans in 1943 to accommodate V-2 reception and storage and not only. It has a mission to prepare rockets for launch in a sheltered and controlled manner, to have on site production of liquid oxygen and much more. Since 1986 the bunker of Watten is on the inventory list of historical monuments. There is also a complex museum you can visit in the Foret d’Eperlecques open to public.

Not very far from Watten, in just 30 minutes drive, there is a town existing since Roman times overlooking to French Flanders, which was also the focus of a network of roads, which are still in use today. This is Cassel, which is on the border of France and Belgium, so if you go here, you can cross the border with one step only. Once you get in, you are in the Market place. Here you’ll see a tourist office, where you can get your map and some information about the town. Park your car here and let’s go to see what we have around!

As it is not a big town, there are just few places to go and explore. The main place to go is the Municipal park of Cassel, which is located on the top of Mont Cassel and has extensive views. The Jardin des Mont du Récollets provides expansive views over the plains of Flanders and beyond; on a clear day it is possible to see the North Sea, the English coast and the belfry of Bruges. Unfortunately I wasn’t one of those luckies and couldn’t enjoy that great view, but still what I had in front of my eyes, was amazing. It used to be said that from Cassel one could see five kingdoms: France, Belgium, Holland, England and Heaven. Inside the garden you’ll see the Monument des Trois Batailles (Memorial of the three battles of Cassel), commemorating the battles of 1071, 1328 and 1677.

Cassel was also the headquarters of Marshal Ferdinand Foch during part of the First World War because it was a better strategic position. The statue of Foch is also standing inside this beautiful garden. Behind it you can find another old mill dating back to the 16th century The Kasteel Meulen (“Castle Windmill”), situated on the highest point of Mont Cassel on the site of the former castle. It was burned down on 30 October 1911 and in 1947 was replaced by an 18th-century windmill that was moved from nearby Arnèke, one of around twenty that once existed in the area. By the way, the mill is open to the public and still operates daily during the high season.
If you are an art lover, don’t miss your chance to visit The museum of Flanders, that houses magnificent collections of Flemish artists and hosts major exhibitions every year. It takes place in the old castellany of Cassel, a 16th-century Flemish building, also called the hotel of the Noble Court. The Flanders Museum is focused on contemporary art and the ancient art from the 15th century to the present day and has a collection of more than 6,000 objects. The building is decorated in a French Renaissance style and has unusual carvings of grotesque heads, mythical beasts and other figures. But if you’re not into the museums, you can just walk in the streets of delightful little town and admire the typical houses around. 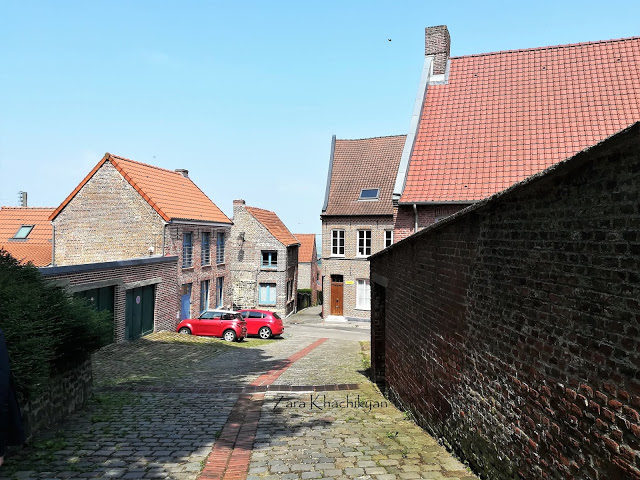 Walk a little bit down, right behind of the Grande Place, you’ll see the main church of Cassel, where Marshal Foch regularly prayed during his stay here during the First World War. This is St. Mary’s church which is more known as Collégiale Notre-Dame-de-la-Crypte within locals. The choir was covered with 19th century frescoes which represent the apostles and various scenes of the life of the Church. There was an organ inside the church which made magnificent sounds with eco when we were in. Two imposing statues sit at the top of the organ, they are King David, represented with a harp, and Sainte-Cécile, patron of the musicians. This Gothic style church has been classified as a historical monument since December 22 , 1981.
And here again our time is up and we needed to go back home. On the way back we crossed one of the most famous communes in this region, Saint-Omer, which is named after Saint Audomar, who brought Christianity to the area. There are always some places that worth to visit but we discover about them only after return. One of those was Abbey of Saint Bertin, which is in ruins now, but was so much stunning that makes hard breathing while looking at it. This place is also in that list that hopefully one day I could return here to visit this place, get into that part of history and feel that spirit of old times…
But my stories from France are not ended! I still have more to tell you about. So wait for more to come 😉

CAROUSEL 🎠
What can be better than a hot coffee in the morning with this view?
Happy May 1, folks 🥳
Museum of 5 continents in Munich is surrounded with beautiful chestnut trees with pink-red flowers blooming.
Start walking as a tourist in your own city and you'll find a lot of beautiful spots you never noticed 🥰
Something beautiful to your timeline 🌼