And here it comes, the last day in France, which I’m going to spent in a city, which is called a second Paris – Lille. My hotel was located in the heart of the city, where 2 main bus & train stations are located: Lille Europe and Gare de Lille Flandres. Just in a few hundred meters away you’ll see one of the most memorable buildings – the Opera of Lille.
The Opera House of Lille that we see today is the second one in its history. There was one before which was designed in 1785 by the same Lille architect, but in 1903 it was destroyed by fire. Current Opéra de Lille is built from to 1913 in a neo-classical style. In 1914 the Germans occupied the city during World War I and commandeered much of the furniture and equipment of the Opéra to furnish the other opera in Lille, the Theatre Sebastopol. After four years of occupation, the building was restored and opened its doors again in 1923 for a re-dedication as the Grand Theatre and a “première française”. Nearby the train station and the General de Gaulle’s place, the opera is located among the most beautiful buildings of the Lille city center which was elected European Capital of the Culture in 2004. 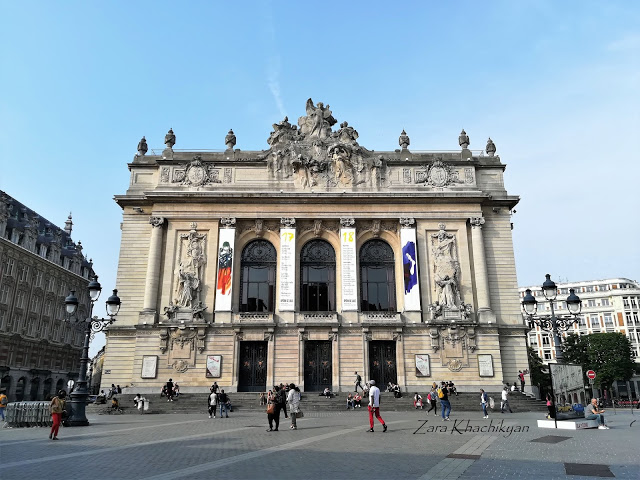 The building is situated in the Old town, which is very typical for this place. It really reminded Paris time to time. All buildings were not too high, usually made of grey stones but with red roofs. Here one of the buildings, which catches attention, is the Chamber of Commerce. It stands right next to the Opera house and is seen from far because of its majestic belfry. The neo-Flemish belfry is 76 meters–high and is decorated with four clock faces. It has 25 bells that regularly ring northern typical songs like Le P’tit Quinquin. Inside, a majestic entrance hall greets the visitors with its huge cupola decorated with frescoes. By the way, it turns out that it’s free to visit, so if you’re in Lille, don’t miss your chance to see the beauty from inside.

The next place which is also very interesting to visit, is The Vieille Bourse. It is built between 1652 and 1653 and was used, as its named mentions it, to greet a merchandises stock exchange. In 1921 it is ranked as historical monument. Today the Vieille Bourse shelters 24 trade houses and keeps the mind of its first function, as it greets secondhand bookseller in its interior court. In this 17th century atmosphere you can find a lot of old magazines, books, all kind of coins and souvenirs. The Vieille Bourse is crowned with the statue of Mercury, the god of trade. But you may notice that its architecture is different and this leads back to the history, when Lille was a Spanish city. Yes, it’s true. Until the 17th century the city belonged to the Spanish crown, but then Louis XIV started a conquest and the city became French in 1667. This is why this building with bright red and orange interior is a testimony that embodies the best the Spanish occupation.

Seems everything interesting is located here in the Old town of Lille! Not very far from the General de Gaulle Square, which was next to the Vieille Bourse, in only 5-6 minutes of walk, you’ll see one of the most different buildings in Lille – Cathedral Notre-Dame de la Treille. This is a mix between Gothic traditions and contemporary art. From the above it looks like a cross and its architecture design looks like no other, built in very simple way. But when you go inside, you’ll have totally different view. The interior was stunning. On the walls (at least at that time) were hanging paintings, there was also a small miniature of Notre Damme de Paris Cathedral. In the peaceful atmosphere prayers were sitting on the chairs or lighting candles. The basilica houses the miraculous statue of the Virgin Mary from which the church takes its name. The 30-meter-high Gothic arch enveloped in marble allows orange and pink light to filter in, casting an ethereal light over the cathedral’s nave.

Another picturesque historical monument which is must see is The Église Saint-Maurice, located on rue de Paris, in the historic center of Lille. The construction of this Gothic style church began at the end of the 14th century and completed only at the end of the 19th century, and it was extended over more than four centuries. The interior houses a number of 17th and 18th-century paintings by artists from the city. The central chapel is dedicated to Sainte-Barbe, patroness of the Lille artillerymen. This huge church will admire you from every side of it, because if you look at it only from the front, you’ll never think that this is a real majestic building from each angle. 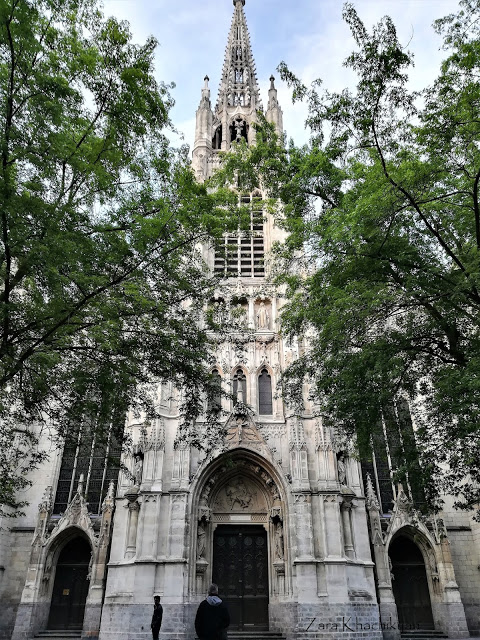 But if you want to spend your time more in the nature than checking the historical part of the city, you can walk through the cute narrow streets enjoying your ice-cream and reach the English Vauban Gardens, where you can sit near the grotto and a small waterfall and relax. Or you can visit Lille Zoo which is on the other side of a small river. In this area kids also can have fun time in the amusement park. Or you can also visit the Lille Citadel, which is located in the same scenic public park and is a historic 17-century 5-sided fortress. Its star shape made its fame, and it’s now a military site, which is also a real lung for the city.
If you are an art lover, in the Tourist Office you can get your free map and advice which kind of museums you can visit during your stay. For sure they will suggest you to check The Natural History Museum, The Palais des Beaux-Arts and of course, The General de Gaulle’s birthplace and museum. But for all this you’ll need more time than a day to stay in Lille, because either you’ll need to run and won’t enjoy your visits, or you will need to choose considering the location, so all of them are in the same area and you won’t spend much time on the way to them.
During my stay there was a temporary “Ola Cuba!” exhibition dedicated to Cuban art, dances and of course, to Che Guevara. The exhibition consists of installations, photographs, paintings and several major productions created for the occasion. It was quite interesting to visit this exhibition, where the whole Cuban life and history was shown in details. The entrance was free. There were also free booklets, in which you could read different stories about Cuba in different languages.

The time was running and little by little sun started to go down. And only I saw that all markets are getting closed, I noticed that I didn’t buy any souvenir from here. Such a pity! I started to “run” on all closest streets with a hope to find a place to buy at least a magnet, but all in vain. They all were already closed! Near the Gare de Lille Flandres there was a big shopping mall, which was also closing at 8pm as all the other shops around. The only market that was opened was Carrefour, where I bought some fresh baked tasty croissant and yogurts for the breakfast and came back to the hotel. This was my last day of French Adventures 2018. I will wake up early in the morning, will take a bus from the Lille Europe to the airport and will be home in few hours. This was a long (but never enough) trip with different kind of places, emotions, feelings and memories.

Let’s see which country will call me next and which kind of adventures are waiting for me there 😉
See you somewhere else, someday soon!
See all my stories here 😉